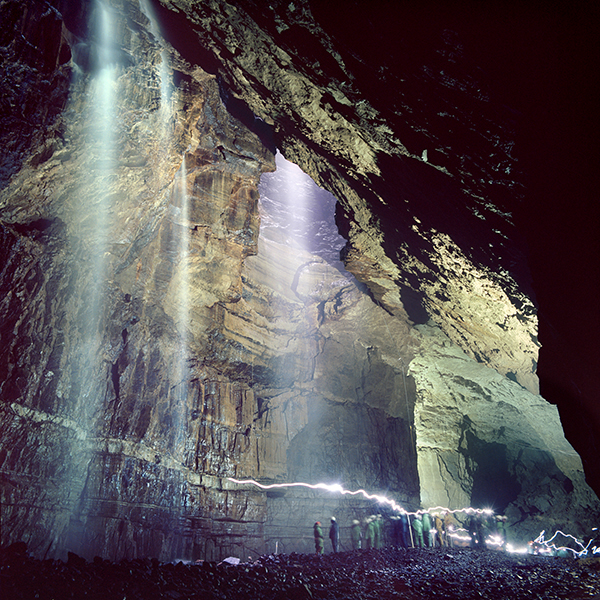 For those who don’t suffer from claustrophobia, there are several routes into Gaping Gill, one of the largest and most spectacular underground chambers in Britain. The Southern slopes of Ingleborough in North Yorkshire are punctured here and there by holes big enough and deep enough to be given a wide berth by walkers and gleefully investigated by potholers. These are the entrances to a massive network of underground caves and passages, dissolved out of the limestone by the relentless flow of water. Dissapointment Pot, Bar Pot, Corkey’s Pot and Stream Passage Pot, among others, have all been linked by underground explorers to Gaping Gill, but twice a year there is an alternative option for those reluctant to crawl through tight, dark spaces – a winch chair, operated for a week in the Spring by the Bradford Pothole Club and for a week in the Autumn by the Craven Pothole Club. Although I didn’t know it before I planned my field trip up to the Lakes and Dales, my visit coincided perfectly with the spring winch meet. Serendipity or what?

So, rather than trying to drag myself and my fragile gear through miles of muddy tunnels I got to take the lift. The view on the way up was better than down. If you watch the video below closely you can see three proper potholers climbing the 100m to the surface on ropes. The waterfalls that drop into the chamber are the tallest uninterrupted falls in the UK and the volume of the whole chamber is about the same as York Minster.