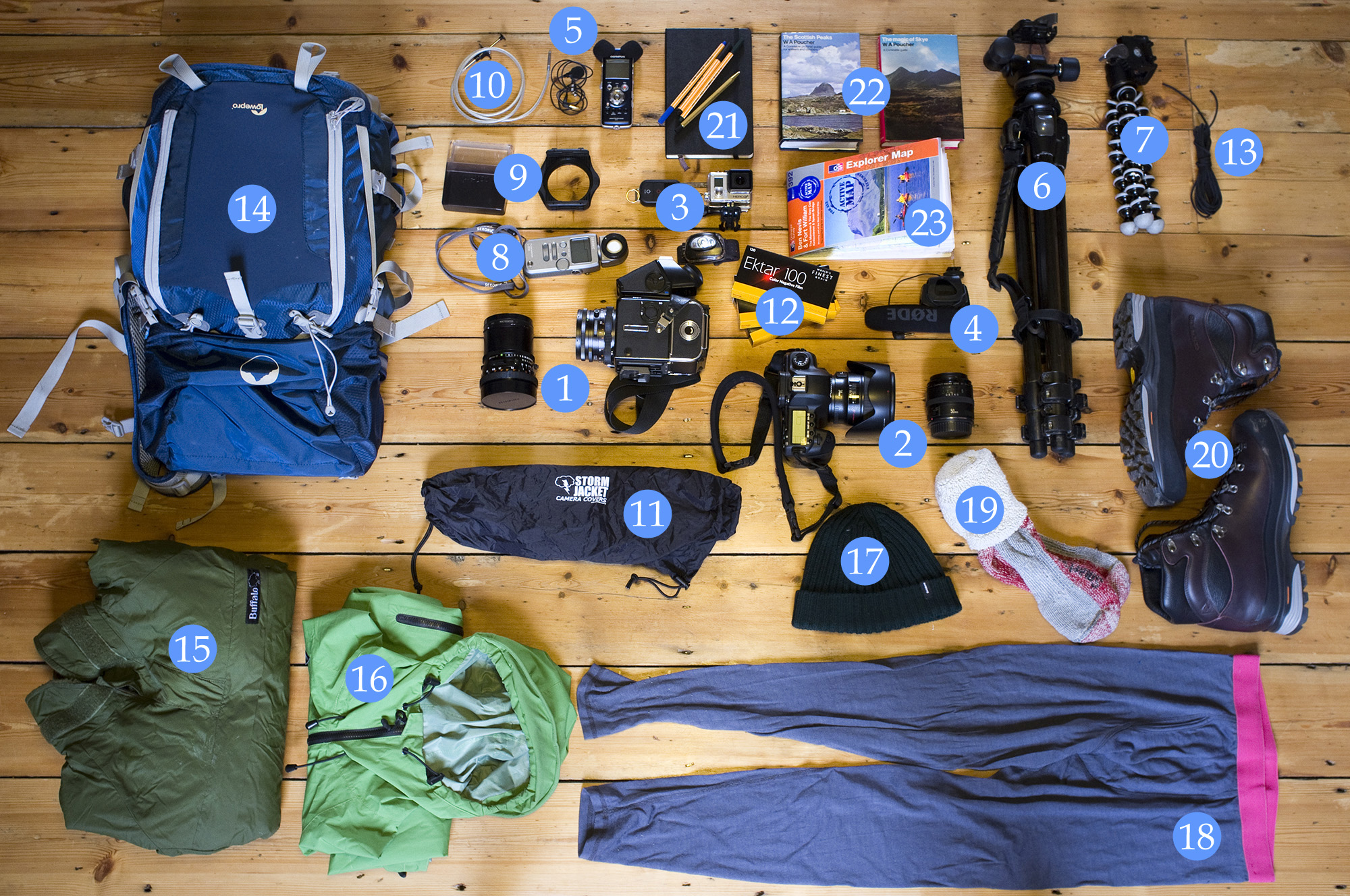 There’s no way I could fit everything I’m taking in shot so these are the edited highlights, the key pieces if you will.

1. Hasselblad 503 CW with a 50mm and an 80mm – This is the camera I’m using for all the images that are going to be in the book “Uncommon Ground”. The Hasselblad’s square format makes it a minority choice for landscape, panoramic it ain’t, but I like the parity it forces between the vertical and the horizontal.

2. Canon 5d MkII with a 24mm and a 50mm macro – This camera is my workhorse, I use a pair for almost all my commissioned work but on this trip it’s principally for filming video although I also use it as a digital polaroid to work out long exposures.

3. GoPro Hero 3 and remote – I just got this little beauty because the 5d is a bit too heavy and fragile to be pulled out in a blizzard half-way up a mountain. This is it’s first proper outing so I’ll be interested to see the results.

5. Olympus LS5 recorder – I’m trying to record as much audio as possible off-camera because the sound quality seems a lot better, especially when I’m a bit further from the camera. I use this recorder’s inbuilt stereo mics to record ambient sound and then use a lapel mic to record myself or others.

6. Manfroto 190 MF3 tripod and compact head – Tripods are always a compromise between stability and weight, this one is about right for me. My tripods take a fair bit of abuse, in particular they are regularly submerged in salt-water or estuary mud or worse so the fact that this one has carbon fibre legs make me a bit less worried about corrosion.

7. Gorillapod – This is a handy second tripod. I wouldn’t use it with the Hasselblad but it’s perfect for the GoPro so I can shoot video whilst I’m shooting stills. As it can be securely attached to pretty much anything it’s also hand for shooting those driving shots in the Van.

8. Sekonic L358 light meter – I’ve got used to using incident light meters although I know they have their limitations in landscape photography.

9. Cokin adapter and ND grad filters – I don’t use filters much but sometimes there’s just to much dynamic range in a scene and it’s good to be able to control it if you have to.

11. StormJacket camera cover – Because sometimes the best images happen in the rain and my Hasselblad doesn’t like rain.

12. Kodak Ektar 100 negative film – This is a relatively new emulsion but I’ve been using it for a while and it seems to be pretty good. It has a wide dynamic range, fine grain and is fairly easy to scan although I find the reds a bit excitable. I’d tend towards over-exposing a bit as I find the shadow areas the hardest to scan.

13. Paracord – Don’t leave home without it. Those of you who are familiar with the Hitchhikers Guide to the Galaxy will understand when I say that string is almost as universally useful as a towel and if your towel should become damp paracord makes an excellent clothesline. I have also used it to reattach a radiator, make a tarp shelter and tether beer to cool in a stream.

14. Lowepro Rover 45AW – This is a hybrid between a camera bag and a hiking backpack, with padded compartments for your photo gear and space for camping and walking gear above it. Everything fits in nicely and it’s much more comfortable to wear than most camera backpacks thanks to a proper frame and mesh system.

15. Buffalo Special 6 Shirt – I’ve been using Buffalo gear since I first went to Labrador and it’s been consitently excellent. A couple of years ago I was show-shoeing across Quebec and Labrador in temperatures below -20C wearing this shirt and was warm and dry throughout. Interestingly, the design is very similar to the traditional caribou skin parkas that some of the older people in the community where I stayed still used, with fur/fleece on the inside to wick away moisture and a permeable windproof shell.

16. Finisterre Anabatic waterproof jacket – A great lightweight waterproof from a very cool company based in Cornwall who are making some lovely outdoors friendly clothing.

18. Finisterre Zephyr long johns – Merino again. These have three great virtues, they are comfortable, they are warm and they can be worn for days and days without smelling funky. Bingo.

19. Smartwool Expedition sock – Another veteran of my Labrador trips. I hate having cold feet and these are the best defence whilst also being low on the blister index.

20. Scarpa SL Ativ boots – When my old boots recently fell apart I took a long time to choose a replacement pair. These boots are 3-4 season and can take flexible crampons (good for icy, snowy peaks) they are also very comfortable and tough.

21. Moleskin notepad – I’m a notepad snob, I admit it. But moleskines are lovely to write in and it feels like they add a touch of class to every scrawled half-thought you jot down. (I like to write with Stabilo point 88 fine fibre-tip pens. I treated myself to a pack of 25 last year and within a month they had scattered to the four corners, how does that happen?!)

22. W A Poucher‘s “The Magic of Skye” and “The Scottish Peaks” – Published in 1949 and 1965 respectively these books are beautifully written and reassuringly precise.

There’s a Petzl headtorch in there too but I couldn’t get a number next to it, invaluable for shooting at night when you only have one pair of hands.

Alpkit Skyehigh 1000 sleeping bag – Kept me warm in a tent at -40C, should be toasty in the Van unless I get lost and drive up to the Arctic.

A stovetop coffee maker – I can do without coffee but I’m a nicer person when I don’t have to.

The Van itself – A blue 1987 VW T25 Syncro Autohomes Komet hightop conversion that has had 2 engines, 3 gearboxes and 2 clutches but is currently running smoothly (touch wood). The kids named it “Campo” and that’s stuck, despite several more erudite suggestions from me (harrumph).

All that and a few pairs of pants and my toothbrush and I’m good to go.