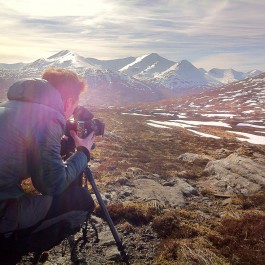 I am a photographer and writer with 16 years experience of documentary and long-term reportage projects. In 2008, whilst working on a book called Wild Swim with writer Kate Rew, I photographed countryside from the Outer Hebrides to the Isles of Scilly and found that my own vocabulary for landscape was woefully inadequate. This realization led me to start collecting words for landscape features, words like jackstraw, zawn, clitter and logan, swash, cowbelly, hum and corrie, spinney, karst and tor.

I’m going to spend a year photographing examples of British landscape features described by these and around a hundred other words for a book to be called “Uncommon Ground”. At the same time I will be collating, from my research and from submissions from the public, an online database of landscape language.  This project will combine photography, text and crowd-sourced information to generate the first ever glossary of the British landscape.

The Landreader Project encompasses geology, ecology, geography and topography but treats these distinctions lightly, drawing equally from science, vernacular and lore to present an exploration of landscape as it is experienced. The richness and depth of the English language is apparent in the lexicon of the British landscape and so this work is also a study of words – colloquial, scientific, prosaic and poetic.

By investigating the interplay between language and landscape, this work will raise questions about our relationship with the environment and the changes that this relationship has undergone. The naming of landscape features was a driver of language development; ever since humans have communicated, they have communicated about their surroundings. Our increasingly urbanized lives and the resulting loss of countryside knowledge means that a large part of this communication has become vestigial and many of the words I’ve collected have fallen into obscurity. In general we no longer need to be able to describe the landscape with precision and detail, but where a specific need remains, for example in groups such as mountaineers, coastal fishermen or wetland farmers, pockets of language persist. Our growing estrangement from the landscape mirrors our growing unease with the natural world. The outside, the countryside has become the unfamiliar “other”, a threat to be overcome and dominated, not understood and enjoyed. Might this partly be because we feel uncomfortable with things for which we have no name? Perhaps we have chosen to render the landscape in such broad, bland terms in order to insulate ourselves from the loss of it?

One of the key aims of the Landreader project is to rediscover landscape words, to record and collate as many as possible and thereby to provide a reminder that there was a time when our ancestors read the lines on the land as fluently as text.

This website will be a source of information about the progress of the project and an online glossary of landscape words to which the public is warmly invited to contribute via the “Submit a term” page. In this way the project will be able to incorporate new words as it progresses, building a searchable database of landscape terms. This database will be an open-ended element of the project that will continue to grow and be used long after my work is completed.