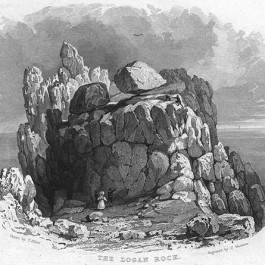 A stone, often the uppermost part of a granite outcrop or tor,that is resting on points of contact in such a way that is can be rocked easily by hand. Some such stones are so massive that the movement was thought to be magical rather than mechanical and the logans were thought to have mystical properties such as only being moveable by those with righteous intent or truthful testimony.The logan at Treen was a major tourist attraction in the 1800s read more here.

Westcountry dialect, probably derived from logging ‘swaying’ or ‘rocking’. In Cornwall to ‘log’ is to sway drunkenly.