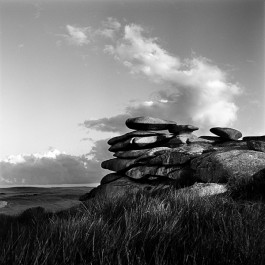 Rock outcrop, often granite, found perched on the summit of rounded hills. Tors are composed of large, well-jointed blocks stacked on a platform of solid rock, a structure that suggests a massively up-scaled, deliberately made cairn. In fact, there is no consensus on how tors are formed and in particular whether the rocks are sculpted by freeze-thaw weathering when exposed or whether the structures are chemically eroded while still subterranean.