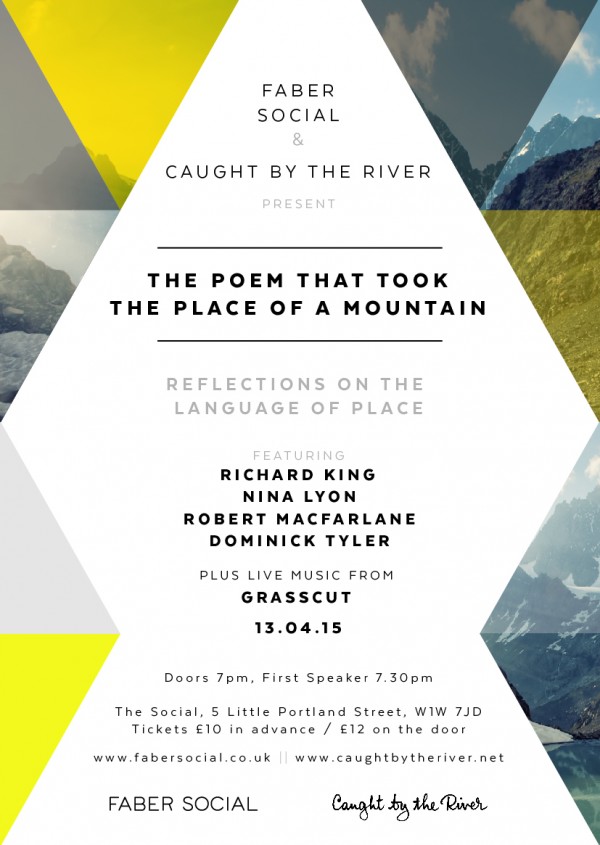 The Poem That Took The Place Of A Mountain: Reflections On The Language of Place

On April 13 we once again join with our friends at Caught By The River to present The Poem That Took The Place Of A Mountain: Reflections On The Language of Place.

Richard King, author of the acclaimed How Soon is Now (2012) which was named Sunday Times Music Book of the Year, joins us to read from his new book Original Rockers (April 2nd). Philip Hoare has said of it: ‘A telling evocation of a lost past, so recent as to still be echoing in my ears, Richard King’s highly personal memoir in music stirs up scenes of provincial revolution, drawing together telling, disparate strands of influence – from the English idyll of Virginia Astley to Bristol shabeens, from the Colony Rooms to the stirrings of the Young Britist Artists. Was this our last utopian intent?’

We welcome back Nina Lyon to read from her first book, a meditation on the Green Man, which is due to be published by Faber in March 2016. Her essay Mushroom Season, was published by Random House in 2014 after being chosen as runner-up in the Financial Times/Bodley Head Essay Prize.

Robert Macfarlane’s new book Landmarks (March 6th) is a celebration and defence of the language of landscape – a book about the power of single words and strong style to shape our sense of place. It is both a field guide to the literature of nature, and a vast glossary collecting thousands of the remarkable terms used in dozens of languages and dialects across Britain and Ireland (from Gaelic to Shetlandic, Suffolk to the Jersey dialect of Norman) for particular aspects of terrain, weather and light.

Dominick Tyler is a photographer and writer, whose new book is Uncommon Ground: A Word Lover’s Guide To The British Landscape (Guardian-Faber, April). Matching one hundred place-words (from abri to zawn) with one hundred beautiful images, it tells the story of his journeys round the country, from the Fens to the Highlands, in search of a rich language for place.

To close out the evening we’re excited to have live music from Grasscut.  Everyone Was A Bird (Lo Recordings, April) is the third album by the acclaimed electronica duo. They have played and performed across the UK and Europe, including on the CBTR stage at Port Eliot. Landscape, the memories it keeps and loses, settlement and spectrality, and technology and its discontents are among this new album’s preoccupations, as its tracks travel from the north coast of Jersey to the Rhinog mountains of Wales, by way of the Sussex Downs.