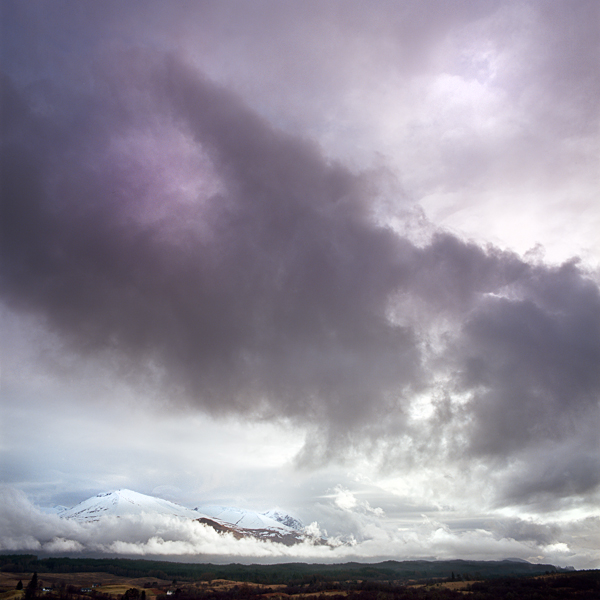 After four days in the mountains I set off for the Western Isles, in search of peat and sand and sea. The road from Fort William to the Kyle of Lochalsh cuts inland towards Spean Bridge before turning North across the valley and offering a view back towards the Nevis Range, which looked gentle and slight beneath a huge, heavy, roiling sky. For some pictures I stopped, but for many I didn’t and wished I had. Passing a football field in Invergarry, I saw a man riding a mobility scooter, armed with a shovel and tilting at molehills. He would have made a wonderful Don Quixote but I hesitated and drove on. For taking pictures, driving is better than being driven (a bus or train can be torture) but neither is as good as walking.

I stopped for the night just outside Broadford on Skye. The grey skies had cleared and the evening looked so promising I searched my maps for something nearby to photograph. Just off-shore a couple of sgeirs were marked and since the tide was low, I gathered my gear and set off. Sgeirs are rocks that are covered at high-tide and exposed at low-tide. The word is sometimes used for bigger rocks, even islets, but sgeirs are more usually small and isolated, such that they might present a danger to a boat if you didn’t know they were there. By the time I had walked to the beach, the light was very low but still beautiful, so I set up some long exposures looking out across the water, watched by a solitary seal who tracked across the scene recording a faint ghostly trail on some of the images (you can barely see it between the rocks below). 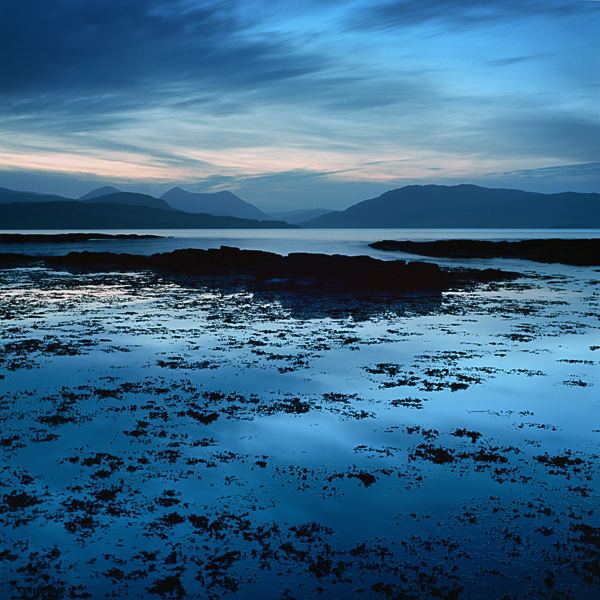 A storm rose that night and for the next five days on Skye, Harris and Lewis, the wind was an almost constant companion. Sometimes it was mischievous as in Portree where it snatched a gent’s cap and tumbled it down the road (when I brought it back to its owner I found his hands were too full of shopping to take it and asked “Shall I put it back on top?”, “Aye, why not,” he said, and offered his bald pate as if for benediction). Sometimes it was malevolent: at the Storr on Skye, a moment’s inattention was enough opportunity for a gust to lift my camera bag and pitch it off the hillside (I chased after it, expecting to find a mess of broken glass and useless gear but amazingly nothing was damaged – returning hats evidently brings good karma).

The early morning ferry from Skye to Harris smelled of toast and diesel. During the previous night the van had been pitched and tossed by strong gusts like a small boat on big seas; by contrast, the ferry, with the deep thrumming of its engines and its gentle motion on the swell, felt more like a big, slow animal as it left harbour and sailed into the Minch. Once out of sight of land, white cloud covered us in a dome that made the rest of the world seem absent, we could have been making any journey, or none. Mounted in the observation lounge, a small computer screen plotting our position on a map periodically refreshed to show islands passing unobserved on either side. The coastline of Harris, when it appeared on-screen, was a fractal pattern of lochs and kyles and sgeirs, rudhas and aigs. The non-virtual Harris appeared some time later on the uncertain horizon as a darkening strip, gaining solidity and colour as we approached the little ferry port at Tarbert. An announcement, first in Gaelic and then in English, asked drivers to return to their vehicles and as the ship maneuvered into its temporary harbour we prepared to leave ours.

From Tarbert I drove first to Stornoway and then Northwards towards Port of Ness. Having looked at the options for places to stay and found very few campsites open that early in the year, I’d booked into a bunkhouse for a couple of nights. The weather forecast was looking grim and my kit was in need of a good clean and dry, so the relative comfort of four walls and heating was an attractive prospect. It turned out I had the place to myself, which was great since I could spread out maps, books and equipment and indulge in crap TV without bothering anyone else.

When the novelty of the afternoon film wore off I walked from the bunkhouse back to the main road and across it to the moorland on the other side. The wind was impatiently dragging peat smoke away from the chimneys, only the occasional sniff of it reached me but even if I hadn’t been able to smell any, the black turfs piled like giant hedgehogs in every other yard identified it. There is still active peat cutting on Harris and Lewis, each village has its allocated area and although most houses are now centrally heated, peat provides a welcome and cheap source of warmth. The peat fire in the pub I found that evening was made slightly surreal by the rhinestone encrusted sombrero that graced its mantlepiece. The rough walls of what had recently been a cattle shed were pasted with posters for Bacardi and Captain Morgan spiced rum, but the drinkers at the bar were sticking to pints. I’d thought of seeking out some local knowledge about the peat terms I was looking for, but my nerve failed so instead I sat with a beer by the hearth and ear-wigged on their good-natured profanity, feeling very like a stranger among friends.

At least the wind felt familiar now, if not friendly, the whole of the following day it jostled and shoved me across a peatbog near the Butt of Lewis until I felt like I was inside a panicky, invisible crowd, despite being many miles from the nearest person. Acting the officious security guard it slammed into me as I tried to set up my tripod – Oi, you can’t do that here – shove off! The track I was following over the moors became less and less secure, in places it had sunk into the peat and in one such dip old wheels had been laid as an improvised causeway. There seemed to me to be some poetry in this arrangement – the dead paving the way for the living somehow. 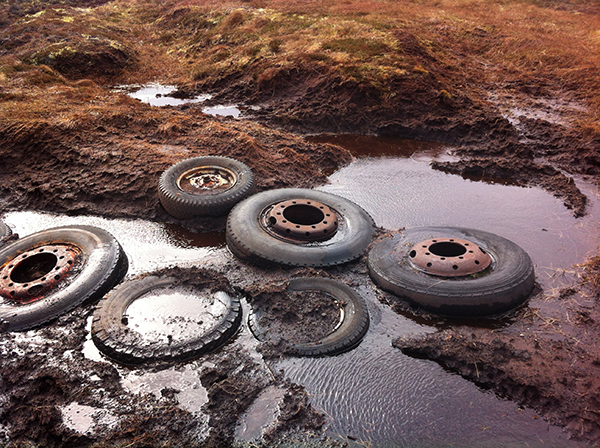 Carried on the unwelcoming wind, the light drizzle that was falling gained the soaking power of a full monsoon and I tried to find shelter in an abandoned shieling but the wind followed me. Carved on the walls were the names of others who’d looked for shelter, not all of them from the wind. “Katie 4 Aly”, and more like them, suggested lovers escaping the eyes of their families, it would have been a fine venue for a tryst in better weather. Shielings, the summer pastures, were the domain of women, it was they who tended the animals while the men stayed in the villages and looked to other work. As I understand it, the men would pay visits but then return to the village. This arrangement was more like a courtship than a marriage and I wonder whether the semi-separation gave husbands and wives a welcome taste of romance, and/or gave the women a welcome taste of self-determination. Perhaps the shielings have always been trysting places.

Lewis marked the furthest reach of my journey. I had more work to do but it was all on the way back and though we’d been in touch most days I was missing my family and glad to be homeward bound. When I drove off the ferry onto Skye a small anxiety, which I’d not fully recognised, was lifted when I realised that there was no more water to cross and only a long road between me and my wife and kids.

In the course of the two weeks I spent in Scotland I shot 30 landscape features, drove over 2000 miles, climbed 3 different munros (one of them 3 times) and ate 16 tattie scones.