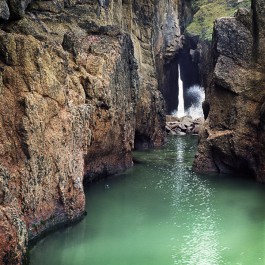 A coastal inlet in a cliff face, with steep or sheer rocky sides. Often the result of a roof-collapse in a littoral cave.

‘Great Zawn’ in Cornwall has been called this in climbing guides going back to the 1950s, using the name used by local people. Many features on the Cornish coast were named by fishermen as landmarks when navigating the coastline. In this part of Cornwall it is quite specific to a steep, narrow fissure in the cliffs. [T.D.]