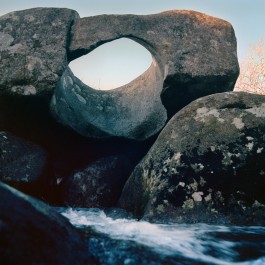 A holed-stone made in rivers by the action of strong circling currents and loose rocks over many years. Considered to hold magical, mystical or spiritual powers by various cultures and often used in related rituals. [see Tolmens, dolmens and lumbago]