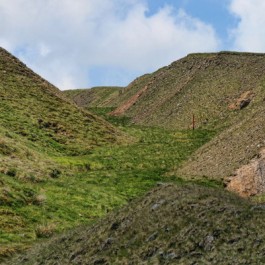 Upto 19th century lead and other metals were mined in the northern Pennines by damming a stream then releasing the water suddenly to wash the surface away and expose the underlying rock. This technique was called “hushing”. The scars in the landscape that were left are called “hushes”. [I.G.]

From OED transitive verb “to hush” originally from noun “hush”: the sound of swift but smooth flowing water.

To send or let forth (water) with a rush; spec. in Lead mining, to send a rush of water over a sloping surface, in order to uncover ore, and separate it from the earth and stones in which it is embedded, or for similar purposes.

The sites of hushing have become known as “hushes”.