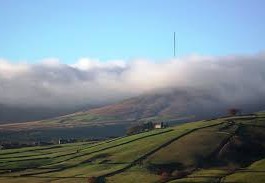 An open expanse of moorland generally between two places of habitation. You can cycle ‘over the moss’ between Keighley and Colne.
The moorland between Yorkshire and Lancashire in the South Pennines is Holme Moss.
Alternatively, it is an area of low-lying wetland such as Carrington Moss and Chat Moss around Manchester.
The vegetation and base are more-or-less the same. Scrub grass and heather (ling) overlying a peat base up to (say) 2oft deep. [D.A.]