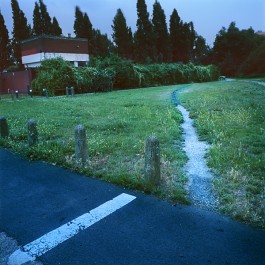 A path which has been established by footfall, in contrast to one that has been made ‘officially’ e.g. a short-cut across parkland that is favored over a concrete track. Such paths express the desire of the user and their proliferation in public spaces can be seen as a measure of the anticipation of those desires in designing the space. In nature similar paths are often made by animals, especially sheep on moorland.

NB. Gaston Bachelard’s book “The Poetics of Space” has often been credited as the source of this term but neither “lignes de désir” nor “chemins du désir” nor any similar phrase appears in the text.